Since the pandemic, the world has stepped on the ‘tech- celeration’ peddle. ‘The Great Indoors’ podcast explores technology’s role in this new way of life.

At the beginning of 2020, we in the Americas marketing team at Amdocs decided to embark on a podcast series. Podcasts have experienced something of a renaissance in recent years and from a marketing perspective, they can lead to fantastic conversion rates: they are cost-effective and are a great tool to foster brand loyalty. But they can also be tremendous fun and reach interesting audiences. After all, podcast listeners tend to be affluent, well-educated millennials and are highly engaged (*93% will listen to all or most of each episode.) *2019 Edison report.

So, we settled on the initial idea of a series focused on cloud computing and 5G monetization, both huge focus areas in the United States and amongst our customers. We also had a community of customers, press, analysts and industry personalities waiting to join us to entertain our audience about how they would transform the telecommunications landscape.

Then something happened! On January 30, the WHO declared the coronavirus a “public health emergency of international concern.” First to lock down were Europe, Asia and the Middle East. By the middle of March, Canada followed suit and by the end of March, 32 out of the 50 US states did so too. Quite literally overnight, the world had changed beyond recognition. We were locked indoors and the pandemic was the only talking point on the planet.

As a direct result, society began to undergo rapid change in the ways we were educated, where we work and how we are entertained. A wholesale cultural transformation was taking place in real time, all underpinned and accelerated by technology. And it was clear that the adoption of new technological behaviors in response to the pandemic had – in an instant – accelerated to levels that were not expected for many more years. The world had stepped on the ‘tech- celeration’ peddle and the award-winning ‘The Great Indoors’ podcast series was born.

The series kicked off with renowned US analyst Chetan Sharma focusing on the brand of ‘technology.’ He related how in recent years, technology had been vilified with claims from various quarters that humankind was suffering as people (particularly children) were deemed to be spending too much timestaring at their screens, hanging out on social media with virtual friends and playing video games. Crazy conspiracy theorists even tried blaming the pandemic on the 5G rollout itself. The episode concluded that technology was undergoing a positive brand rebirth, with connectivity now the glue holding society together.

Alex Shiffrin CEO of LP/AD and Matt Roberts of Amdocs

By the conclusion of episode two with Anthony Goonetilleke, Amdocs CTO and Head of Strategy, we realized that something else profound was taking place: the ‘tech-celeration’ was touching every demographic rather than just typical tech-focused cohorts. Anthony related with astonishment how his mother was now happily embracing digital online banking, not because she wanted to, but she had to. He called it “the democratization of digitalization”.

Globally, most people were now working from home, being educated from home, shopping from home and banking from home. A recent Mckinsey study indicated that during this time, we have vaulted forward in consumer and business digital adoption by five years in a matter of an eight-week timeframe. Online shopping in the USA showed ten year’s growth in three months. In banking, the Economist noted that the share of cashless transactions worldwide had jumped to levels that they had only expected to see in five years. In healthcare and medicine, The New York Times interviewed a British doctor who stated that the National Health Service had undergone a decade of change within a week, as doctors switched to remote consultations.

Combined with the results of a US survey we had just commissioned at that time, Anthony then discussed how these observations shone further light on the seismic wave of digital disruption, behavioral change and the way it was directly impacting all elements of society. Specifically, the survey found that US consumers cared more about the quality of their connectivity than ever before.

From here, we branched into several different directions. In our third episode, we were joined by Vicky Sleight, head of diversity and inclusion at TM Forum, who discussed how the lockdown and working from home were challenging gender stereotypes, and how diversity was now more important than ever if companies were going to make it through the pandemic. In episode four, we discussed the digitalization of marketing and the virtualization of industry events with Alex Shifrin, CEO of LP/AD, who spoke about the messages that consumers were responding to and how they had clearly changed. A key observation was that the placement and positioning of these messages were now almost exclusively digital.

Episode five was a fun experiment and the adage of “never work with animals and children” was challenged, as my three daughters joined the podcast to talk about how they were adapting to virtual education. They opened up to how they now used videoconferencing platforms such as Teams and Zoom, and how cloud-based applications like Google Drive and Google classroom were now a part of their everyday lives. And while their computer literacy had been propelled by the pandemic, we couldn’t get away from the clear fact they missed physically interacting with their friends and weekly school spectacles like Pizza Day. 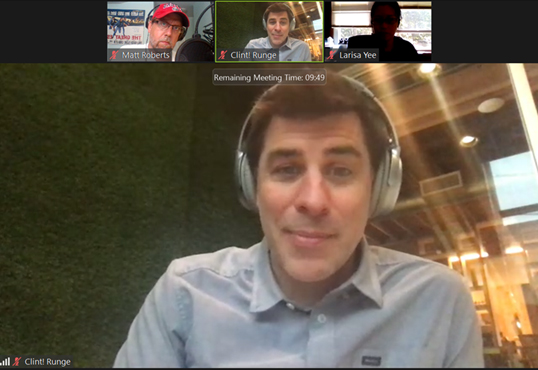 Yet in stark contrast to the more fortunate of us, the episode clearly demonstrated that a digital chasm had opened. We turned to the lack of access to high-speed internet for many of the world’s children, as well as the inability of disadvantaged families to afford the basics to educate (and in some instances even feed) their children in the midst of a lockdown. We concluded that much work remains to be done for policymakers globally, and that this chasm seriously hinders the democratization that Anthony had mentioned earlier. We also discussed how this period had witnessed the unveiling of many unlikely heroes who were taking on governments and policymakers to try and address these issues. Marcus Rashford of Manchester United instantly springs to mind.

Episode six saw us considering even broader negative externalities, as we were joined by Dr Victoria Ngo, Associate Professor at CUNY Graduate School of Public Health and Health Policy. Dr Ngo had just concluded a study in New York that showed the extent of what she termed the “second pandemic” – that of mental health. In a sobering conversation, she revealed how COVID-19 had seen a doubling of mental health illness. We discussed that the most prominent recommendation from the WHO to alleviate mental health illness was to harness connectivity to maintain regular contact with friends and family, with the conclusion that cell phones are essential to preventing or lessening mental health issues.

But my favorite episode – to date – has been episode 7 with Nick ‘Fitzy’ Stevens. For those not familiar with him, Nick is a sports broadcaster who hails from the Boston area, and is popularly known as a Patriots superfan. He has also appeared in Verizon 5G TV commercials with natural comic talents that complement his undisputed sports knowledge. In this episode, he discussed the return of sports to our TV screens, albeit with artificial sound and no live spectators. Yet still, technology was enabling a glimpse of normalcy in society. We also spoke about the future of the sporting experience, including the effects of 5G-enabled stadiums – peppered with anecdotes from Nick’s knowledge of antiquated English sporting terms. (listen to the Challenge Fitzy section of the podcast!)

For episode 8, we were joined by Clint! Runge, on the topic of Generation Z. Clint! a Gen-Z expert discussed the burden of pandemic on this demographic cohort. He related how Gen-Z, who as the first ‘digital natives’, are the first demographic to be born into the smartphone age, yet as such, are more negatively affected by the pandemic than any other group in society.

It took nine long years before the isolation of the measles virus in 1954 and the licensing of a vaccine. The world had to wait 20 years before early trials of a polio vaccine and its first American license in 1955. Now only twelve months since the identification of Covid-19, several vaccines are ready to be deployed around the globe. It seems that it is not only the tech sector that has undergone a rapid acceleration. It has given us a light at the end of this tunnel.

The Great Indoors will return as a global edition in early 2021, with some fantastic guests, and in the next series of episodes, we’ll examine what has disappeared forever, what will revert to pre-pandemic normals and where innovation is accelerating the digital transformation. For example, there are companies who are already busy building new tools that will improve the experience of online working, online education, enhance the virtual retail world and provide new experiences from virtual conferences to virtual socializing.

At Amdocs, our mission is to progress society and enrich lives. There is no going back to 2019 and the world will look very different in 2021. It is these differences – reflected in society and empowered by technology – that we look forward to discussing on the Great Indoors in 2021.