Our people are at the heart of any transformation 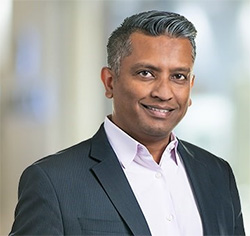 October, 2020 - Recognizing Amdocs’ outstanding success in completely transforming its culture to accelerate service providers’ move to the cloud, industry association TM Forum have selected Amdocs as the winner of its prestigious Excellence Award in the Human Factor category.

The award was announced at this year’s Digital Transformation World series digital conference during the event’s opening Headliners keynote session on October 7.

In an interview with TM Forum to celebrate receiving the award, Anthony Goonetilleke, Amdocs Group President – Strategy & Technology explained: “We made a very intentional effort to pivot our company to accelerate the way we deliver value to our customers, and that included our people… Our people are at the heart of any transformation.”

Organizations need to adapt and adapt fast in order to swiftly address different business behaviors noted Avishai Sharlin, president of Amdocs Technology. Amdocs, he continued, changed completely to become a modern, digitized organization to better serve its customers. Although adoption of new technology is crucial in this journey, so are people. One thing that was clear to Amdocs from the first day, said Sharlin, was that it all relates to culture.“It’s all about the human factor” inside an organization, changing parts of the company’s DNA to embrace openness.

Diversity too, is important, stressed Goonetilleke, proudly pointing out that 40 percent of the company is managed by female leaders. “We’re very intentional in terms of diversity and we think it’s a kind of secret ingredient” for our success.

“Congratulations to Amdocs for its achievement in this year’s TM Forum Excellence Awards,” said Nik Willetts, CEO, TM Forum. “This year’s winners exemplify commitment to the evolution of the industry through digital transformation, and the impact of TM Forum best practices and standards developed through our member Collaboration Community. Our sincere congratulations to Amdocs for playing its part in accelerating digital transformation, and our thanks for its commitment to TM Forum, our members and the telecoms industry as a whole.”