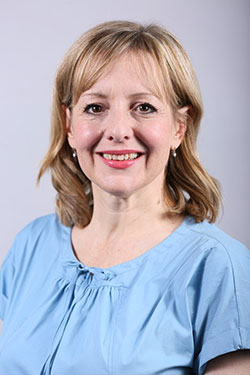 We see it in the press everyday – communications service providers (CSPs) are investing billions of dollars in next generation networks – fiber broadband, 5G, cloud, edge, IoT, satellite, enterprise. But building super-capable networks won’t, on their own, grow revenues. We all want to be connected, and at faster speeds, but as well as that, we want a digital ‘cloud-like’ experience and a raft of new digital services.

So CSPs are transforming to be digital service providers – expanding from connectivity to deliver and monetize the new digital services we will use to live, work, learn, relax and socialize.

But this requires a high degree of automation – not only in customer interaction, but in network operations. If we only digitize and automate the front of house, the experience and the service quickly breaks down when it reaches a manually operated network. And with the network becoming even more complex, the vision of a digital experience and a digital service is becoming harder to achieve.

CSPs recognize the importance of automation and have begun to automate. But the starting point has been ‘islands’ of automation for specific tasks – specific network domains or for an individual service. This has led to a proliferation of automation solutions for different process and network domains. Some benefits have been achieved in automating repetitive tasks and in managing new technologies – but the end-to-end network and the services it carries are still managed by legacy and largely manual OSS silos.

Instead of this siloed automation approach, CSPs should first select a strategic automation platform – one that will enable them to automate the hybrid network end-to-end and form the basis for new service launches. Network organizations are really good at defining a strategic network architecture and deploying it over time. Success in automation will require the same strategic approach.

Next-generation networks are complex. Public, private, and hybrid clouds interact with legacy and next generation networks and with a whole ecosystem of application and content partners to deliver new types of services. With 5G deployments accelerating globally, this will only get more intricate.

Managing this kind of infrastructure with partial, siloed automation forces CSPs to use often convoluted “workarounds” to make it all gel together. These ad-hoc approaches are driving even greater dependency on time-consuming manual steps and long lead-time break-fix activities.

Not only does this approach make it hard to have end-to-end visibility, it’s also challenging to launch, deliver and assure new types of services along with the old.

Start with the end in mind

Standardizing on an underlying automation platform can substantially simplify managing both legacy and new service offerings – by making them all manageable in a unified and seamless manner.

SES is a good example. Instead of launching new business connectivity services such as SD-WAN with siloed and tactical support systems, it opted to deploy a strategic automation platform that would form the foundation for all future service launches. Thanks to its foresight, SES not only successfully launched its new cloud-based SD-WAN service but is now building on the capabilities of its automation platform to support the end-to-end orchestration of new cloud-based offerings.

A Tier 1 in the USA made a similar strategic decision and implemented its first software-defined enterprise service on a strategic automation platform. In rapid succession, it was then able to launch a whole raft of new services including virtualized CPE, WAN optimization, firewalls, virtualized Wi-Fi and with the benefit of automation it was able to turn these services into managed services – managed Wi-Fi, managed security, managed WAN.

And it’s not just about responsiveness to customer demands. Consolidated automation also allows CSPs to experiment with new services: launching them quickly, scaling them up, or withdrawing them just as swiftly, depending on their success.

And then there is the impact on the customer experience: in our on-demand world, we’re used to clicking, paying and using services immediately. Waiting several weeks for a service to be activated or an error to be rectified manually, is no longer a viable option. 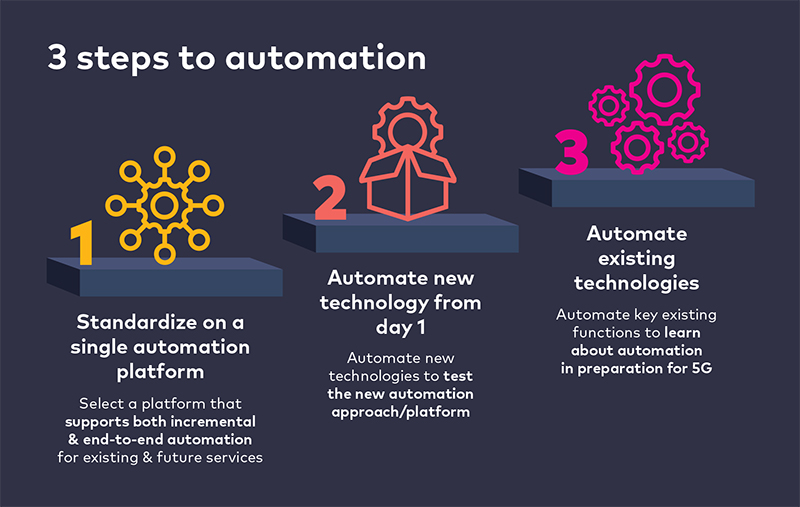 Now as we move to 5G and cloud-native networks, we have the chance to take a different approach. It is a three-step approach:

Automation can no longer wait

We all agree automation is critical. Without far-reaching automation, service providers will not be able to efficiently operate and monetize the next-generation networks they are building. The service providers who get it right will achieve the low-cost operating model they need to thrive and the service agility and innovation they need to compete.

However, automation needs to happen strategically, with the long-term game plan in mind.

This means selecting a single platform for all automation, rather than returning to the stovepipes of old. On this solid foundation, service providers then have the freedom to progress automation at their own pace – but with a firm red thread throughout.